THE SANDWICH GLASS MUSEUM IS OPEN WED-SUN 9:30-4:00 IN FEBRUARY AND MARCH 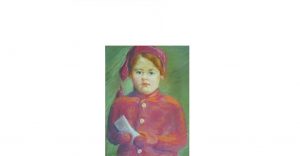 The Sandwich Historical Society and Glass Museum is pleased to present the special exhibition, Her Place by the Sea, featuring works from the collection of local artist, Alice Lucy Ware Armstrong (1876-1952), donated by her granddaughter Junardi Armstrong. February 1, 2018 – December 30, 2018.

Through the efforts of Ann Shea, a Museum intern, local teacher, and writer, Alice’s remarkable story begins to unfold… Born in 1876 and deaf from an early age, Alice Lucy Ware Armstrong overcame the limitations of her disability and aspired to creative self-expression. Her paintings were exhibited alongside some of the greatest Impressionists, and her woven goods were sold in Cape Cod’s gift shops. “I am out for something in a world where people work for their living,” she once declared. “It is all the difference between being nobody, and being SOMEBODY.” Silence accompanied her, but Alice’s natural sociability and her supportive family rescued her from isolation. Born in Worcester, Alice attended the Clarke Institution for Deaf Mutes where she earned an award for lip reading at graduation in 1893. “I was lost, and in a world of my own,” she later wrote. “You, who can speak and hear, cannot possibly realize how lonesome the world can be, lacking the ability to express one’s thoughts, or to gain a knowledge of the thoughts of others.” Alice spent her childhood summers in East Sandwich. Her maternal grandparents, Joseph Hoxie and his wife Mary Holway Hoxie, lived nearby. Grandfather Hoxie was a farmer, shoemaker, postmaster, school committeeman, local selectman, and member of the Friends Meeting. He served two terms as a Massachusetts Representative. In the late 19th century, women were increasingly venturing into activities once thought appropriate only for men. They were seeking equal rights. Armed with the ability to speak and lip read, Alice decided to pursue higher education, focusing on art. Alice attended the Friends Boarding School in Providence, Rhode Island, the Worcester Museum of Fine Arts School, the Cowles Art School in Boston, and the School of the Boston Museum of Fine Arts where she studied under Edmund C. Tarbell, the leader of a group of artists who developed the Boston School style of painting. When Alice finished her schooling, she worked as a portrait painter at her home in Worcester. In 1902, her Portrait of Miss Anna L. was exhibited in the 71st Annual Exhibition of the Pennsylvania Academy of the Fine Arts along with paintings by Edmund Tarbell, Frank W. Benson, James McNeill Whistler, and Winslow Homer. Alice continued to summer in East Sandwich with her parents. She met her husband David Lindsay Armstrong, owner of Meadow Spring Farm, on East Sandwich Beach while she was painting at her easel. They were married in 1906 and had four children, Donald, Robert, Dorcas, and Irene. Although her mother had three kitchen servants in her Worcester home, hired help wasn’t an option for Alice at Meadow Spring Farm. Farming is hard work, and David needed and expected her to handle childcare, cooking, house-cleaning, and laundry as well as gardening, canning, preserving, and other farm chores. Seemingly, there would have been no time to practice her art, but Alice created opportunities for herself, stealing moments from her daily life to sketch with pencil and pad. She filled her home with paintings – portraits of her children, kitchen and garden still-lifes, and scenes from Meadow Spring Farm – barnyard, fields, woods, and seashore. After the death of their oldest son Donald at age twelve, finances became burdensome. To help make ends meet, Alice involved herself in the Arts and Crafts movement. She must have been reminded of her father, Justin Ware, who worked in Worcester’s Crompton Loom Factory, when she decided to take up weaving. An article in the Cape Cod Sunday Standard-Times described Alice’s home industry. “Mrs. Armstrong first thought of weaving… when she found a little old hand-loom in a crowded garret with its spinning wheels and distaffs… As the products which Mrs. Armstrong developed became known, an increasing demand for them was evident and four looms were in constant operation as she worked to maintain pace with her orders.”

Alice worked hard to connect with other artists on Cape Cod and beyond. She joined the Cape Cod Art Club and the Boston Society of Arts and Crafts. She operated her own woven goods shop in a corner of the Daniel Webster Inn. Her memorandum book shows that she also had many private orders for her weaving. Alice Lucy Ware Armstrong valued nothing more than personal connections. “Do you remember me when I was a little, helpless deaf child, shut out from so many things that most people appreciate and enjoy?” she wrote in a fundraising letter for the Clarke Institution. “I could see, smell, taste and feel, but in order to really enjoy life it is necessary to talk and discuss things and events.” Although she could lip read, some people had difficulty understanding her “limited” powers of speech, as the Cape Cod Standard-Times reporter described the evidence of her disability. However, the reporter also noted her “…sense of humor and engaging smile [that] have been the cause of her being known and liked throughout her community.” Her Place by the Sea, featuring the story of Alice Lucy Ware Armstrong and examples of her art work, will open on February 1, 2018 and run until December 30, 2018.
Category: Museum Updates