Talk of the Town Speaker Series 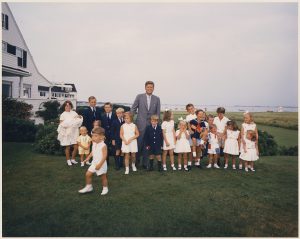 Brian is the retired first justice of the Orleans District Court. He also researched and was curator of the Timeline Wall of the John F. Kennedy Hyannis Library Museum.

In the Presidential campaign summer of 1960 and the three summers that followed, the eyes of the nation and of the world were focused on the small hamlet of Hyannisport. It was the summer home of John F. Kennedy. The country watched the glamorous family at play and saw the momentous events of the chilliest days of the Cold War intrude upon the Kennedy clan. Mr. Merrick will tell you about those summers, the family history that led up to them and how they changed Cape Cod and the nation. His presentation will be accompanied by many photographs of the family during these turbulent years that contained both great joy and profound sorrow. It will bring back strong memories to many in the audience.