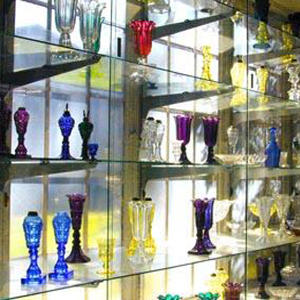 You are here: Home / The Collection 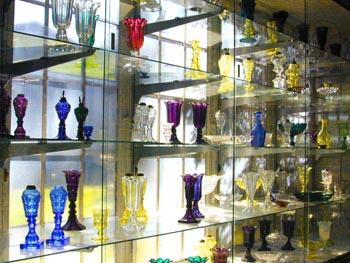 The glass company also produced mold-blown wares. Many of these designs mimicked English and Irish cut glass patterns, but mold-blown pieces were more easily made and required less skilled labor.
Mold-Blown Glassware
c.1830
In the mid-1820s, American manufacturers began to experiment with pressing glass with the use of a lever-operated machine. Sandwich was quick to utilize the pressing machine. Jarves did not invent the pressing process, but he did receive several patents for improvements in pressing techniques and mold designs. One of the first items easily and cheaply pressed was the cup plate. It was the custom in the early 19th century to drink tea from a saucer. The cup plate became the coaster for the tea cup. 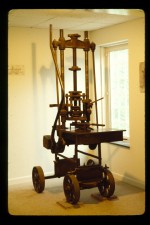 However, plenty of traces of the glass company did remain – in the form of glass fragments. Serious glass collectors, tourists and artisans sought these small treasures in the marshes and on the beaches. Hazel Blake French and Nina Sutton were jewelry designers who polished the glass fragments to look like jewels and designed settings for them.